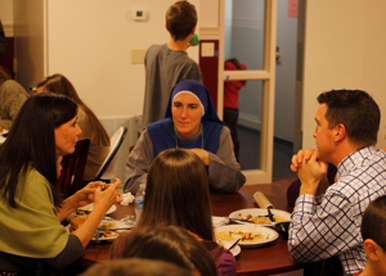 A call to serve the Church as a priest comes from God and parents play an important role in making that call heard and by being mirrors of God’s unconditional love. The support parents lend to a young man’s discernment process is more important than any other figure in his life. This reality can sometimes cause a young man to keep his discernment private. He may fear that his parent’s reaction will be less than supportive.A parent should not take this fear personally. In fact, a few words about nine of the most commonly raised concerns may be helpful to you while you process your feelings about your son’s discernment to serve the Church as a priest.

1. Do not to be offended or hurt if your son did not confide in you first, or early on in his discernment. Young people who are in discernment oftentimes keep this process confidential from the people who mean the most to them until they feel ready to put the experience into words and to speak about it face to face.

Rest assured that your son both needs and desires your support and encouragement. In fact, your support as a parent is most likely valued more than any other figure in your son’s life.

While a child’s faith, worship, and vocational plans are oftentimes influenced by family practices and expectations, a vocation to serve the Church is a call from God, the author of all life. This call is intensely personal. Although your son desires to discern his call with great attention and fidelity, you are not obliged to alter your current religious practices unless you wish to do so. Still, your son will certainly benefit greatly from your support during his discernment.

3. Occasionally parents become concerned that their son is not suited to serve the Church due to certain temperaments or failings. These same concerns are commonly expressed by the very individuals who are in discernment.

The priesthood and religious life requires a high caliber of skills, abilities, and psycho-sexual maturity. However, it is not reserved to “the perfect.” If every young man who experienced the first movements in his hearts to serve the Church waited until he felt completely worthy to begin his discernment, we may not have any priests at all! A genuine vocation is not measured by one’s feelings of worthiness, but rather by one’s desire to respond to God’s call to serve the Church as a disciple of Christ.

The academic and formation programs offered in the seminary seek to develop a candidate’s natural skills and abilities and to remedy any weaknesses or deficiencies. This occurs over a period of years. Before the discernment process reaches this stage, however, the most supportive action parents can take is to encourage their son to be faithful to God’s call.

4. Some parents express anxiety about what may happen if their son leaves seminary before its completion.

It is possible that your son could spend as few as five days or as many as a five years in seminary and discern that a life of single-hearted service in the Church is not for him. There is nothing shameful about withdrawing from a program for this reason. The time spent in formation should never be considered a waste. Your son will have grown in holiness, self-awareness, and in personal maturity through the entire process of discernment and by his time in a formation program.

5. Some parents express anxiety over their son’s potential loneliness as an unmarried person.

There is a difference between aloneness and loneliness. In the life of a priest, moments of solitude or aloneness are required for prayer, reflection, homily preparation, and rest. Many priests experience aloneness without feeling lonely. Further, in the midst of his ministry, a priest interacts with hundreds of individuals a week, and many life-giving friendships are enjoyed. Still, no vocation, even marriage, is immune to loneliness. Therefore, a priest must always be vigilant in maintaining healthy relationships with family, friends, brother priests, religious brothers and sisters and parishioners.

6. Some parents are saddened by the fact that they’ll be unable to enjoy the presence of grandchildren or a daughter-in-law through their son’s marriage.

Although the presence of grandchildren would offer much happiness, every parent desires first and foremost that their son or daughter live a joyful and fulfilled life. If God is calling your son to serve the Church as a priest, fulfillment, happiness and holiness of life will only be fully realized by faithfully responding to this call. Further, the Church recognizes with great respect and appreciation this sacrifice of parents. We trust that God will bless you abundantly for supporting your son through his discernment process.

7. Some parents feel as if they are losing their son in a permanent way, or that they will not be able to see or visit their son during his years in the seminary.

If your son’s discernment leads him to enter seminary, his departure will be similar to a son leaving home to attend college or to enlist in the military. There will be an inevitable transition period for all parties. If a son enters seminary to study for the priesthood, he will most likely make visits home during Thanksgiving, Christmas, and over the summer vacation each year. Throughout his formation in seminary, he will be encouraged to maintain and develop family relationships through periodic visits and by frequent communication.

8. Some parents are not sure whether they know how to adequately support their son.

This is another common anxiety. In many other moments in your son’s life you have felt ready to offer sound advice from your own past experiences. However, because a vocation to the priesthood is a such a unique call, you may feel unqualified to offer helpful advice. Your son understands this and does not expect you to be omniscient! One helpful question you can ask your son is, “What is the most important thing I can do to assist and support you?” This simple question will mean a great deal to your son. It is a further sign of your unconditional love as a parent.

Another helpful question is, “Is your discernment of a vocation something that you’d like me to keep confidential at the moment?” This will assure your son of your respect for his “pace” of discernment and of its public knowledge.

Regarding finances, the majority of the expenses associated with your son's education while he is enrolled in seminary for pre-Theology and Theology will be assumed by the Archdiocese. The Archdiocese also helps significantly with the college funding through a liberal loan policy which, in the event of ordination, is forgiven.

9. Lastly, some parents have expressed remorse that had they offered a more functional, loving model of marriage, their son would have chosen a married vocation over a single-hearted vocation to serve God’s people and His Church. In other words, an attitude is adopted that “[i]t’s my fault that my son is discerning a vocation to the priesthood.” This is very rarely a reality and this sense of causal-guilt should be abandoned.

Although a functional, loving model of married life in the household is very beneficial, several healthy models of marriage are present in the lives of children and young adults among neighbors, extended family, parishioners, coaches, and teachers, to name only a few. A vocation comes to a young person in the form of a personal call from God and should never be seen as a last or only option due to a limitation of choice.